A New Way To Look At Book Clubs 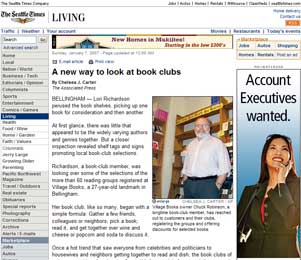 BELLINGHAM  Lori Richardson perused the book shelves, picking up one book for consideration and then another.

At first glance, there was little that appeared to tie the widely varying authors and genres together. But a closer inspection revealed shelf tags and signs promoting local book-club selections.

Richardson, a book-club member, was looking over some of the selections of the more than 60 reading groups registered at Village Books, a 27-year-old landmark in Bellingham.

Her book club, like so many, began with a simple formula: Gather a few friends, colleagues or neighbors; pick a book; read it; and get together over wine and cheese or popcorn and soda to discuss it.

There's "Pages, Pictures and Pints," an all-comers monthly book club where participants read a book, go see the movie adapted from the book and then get together for drinks at a bar to discuss it. Among the books-turned-movies up for discussion in the new year is John le Carré's "The Constant Gardener" and Joe Simpson's "Touching the Void."
advertising

Around the country, book clubs have also become networking tools for young professionals. In Hollywood, a group of production assistants formed a reading group to discuss books about the movies or television shows they work on. In New York, a group of would-be playwrights gets together to read published plays and make suggestions about their own works.

Norman Hicks founded Reader's Circle, a Web site aimed at providing an alternative to the traditional book club, as a way to meet people after graduating college.

Pickering said it also was cost-effective for participants who can't afford to buy new books on a routine basis. Since its inception, PaperBackSwap.com has amassed a library of 900,000 books and sees its users trade about 30,000 books a month, Pickering said.

With the decrease in book sales, book stores large and small have begun using the Internet and technology, such as the iPod, to sell books for download. They also have begun creating online book clubs to link readers together.

But it is still the face-to-face meetings, the social aspect that appears to drive the book-club culture  and its success or failure.

For Barbara Randall, a book club was a way to meet neighbors after moving into her Brooklyn, N.Y., neighborhood. For nearly seven years, the women on her block met monthly to discuss books  and their families.

"A lot of us in the group were mothers with children, and we were desperate to get out of the house," she said.