Hungry For Books? Participate In A Literary Swap 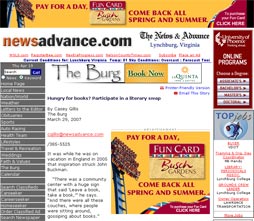 It was while he was on vacation in England in 2005 that inspiration struck John Buckman.

"There was a community center with a huge sign that said 'Leave a book, take a book,'" he says. "And there were all these couches, where people were sitting around, gossiping about books."

Buckman says he thought it would be great to re-create that on the Internet.

"It was the human element of people sharing books and talking about them that was magical to me," he says.

When he returned to the states, he founded BookMooch.com, an online book-swapping site.

At first, "I nagged every person I knew who had very good book tastes to get on the site," he says.

"It's everything from college textbooks all the way to romance novels," Buckman says. "It's really all over the map."

The way it works is simple: new users post a list of all the books they want to swap, and for every book they post, they receive one-tenth of a point.

Every time they actually send someone a book, they earn one point, which they can then use to get any book they want from someone else on the site. And the only cost is mailing books to others.

"It's a great way to discover books," he says. "You can get books for free that you may not consider buying."

Buckman says they encourage users to send books abroad by awarding them three points for every title sent out of the country.

BookMooch users can also give their points to one of the charities the site works with, including children's hospitals (so a sick child can get a free book), public library funds, and other charities for children and new mothers.

"For some people, it's not about getting free books," Buckman says. "It's about finding new homes for their books."

And BookMooch.com isn't the only game in town - sites like it are popping up all over the Internet.

The site has about 20,000 users and an inventory of 150,000 books, and it works a little differently from BookMooch.

Instead of paying to mail a book to someone else, users pay a flat shipping fee of $3.99, regardless of the book's weight, for each book they receive. The site also tracks the order for free.

Each book on the site is assigned a point value according to a system they've created that tracks 60 different characteristics that make a book valuable, Silverman says.

Some of those factors include the book's age and retail value, if it's won any awards, if it's on the New York Times bestseller list or if it's been recommended as an Oprah Book Club selection.

"The nice thing about it is they do have some bestsellers on there, as well as some fairly obscure books," says Bruce Huffman of Rocky Mount, who has used the site since September. "It's really nice to be able to pick up some books you probably couldn't get anywhere else."

Huffman says he's sent books as far away as Hawaii.

"It puts your book out to a larger market," he says. "It's exciting when you get these requests for books, and you send them off to exotic locations."

When designing Bookins' system, Silverman says simplicity was the most important thing.

"All the decisions are made for you in very simple ways," he says. "The premise is that most people don't want to take the time to make all these decisions around books."

And if any problems arise between users during the swapping process, Silverman is around to step in.

"If you have a problem, you let us know, and we take care of it," he says, by either replacing the book or giving a full refund at his own expense.

"I often kid Mitchell, 'Do you ever sleep,'" he says. "When you e-mail him, he gets you a reply right away."

The biggest book swapping site at the moment is PaperBackSwap.com, which has had more than 1 million successful swaps in its two-and-a-half year history and boasts an inventory of more than 1 million books, according to founder Richard Pickering of Duluth, Ga.

Lynchburg resident Angie Kraje first found the site through another message board she was using to trade books.

"I was trying to collect several books from one of my favorite authors," she says. "I would go to book stores all the time and keep an eye out for them."

When she signed up for PaperBackSwap.com, she found a few of them and was able to add the others to her Wish List.

Then, "if somebody posts (the book I want), they'll send me an e-mail letting me know, and I can choose to request it," she says.

All of the sites mentioned in this article provide Wish List options, where users can list the books they're looking for, and they're notified once those titles are available.

"I'm one of those people who love to have the book, to own the book," Kraje says. "I try to go to the library, but they don't always have what I'm looking for. (And) if it's a series, I want them all."

After she's done reading, Kraje says she keeps some of the books and posts others back onto the site.

Owner Pickering is the same way.

"I am an avid reader," he says. "I probably have a dozen books on my nightstand right now. I finish them and post them and get some more."

He created the site with computer programmer Robert Swarthout out of pure frustration over commercial sites, where he had to pay full price, plus shipping and handling, for books.

Plus, "I travel all the time, and I had all these paperback books lying around that have been used exactly one time," he says. "? I was always telling family and friends (that) there has to be a better way to swap books.

"(I kept thinking), 'I know there's other people out there who want to read these books," he adds. "There's just not a market here."

When he and Swarthout were first getting the site up, "we didn't employ a lot of heavy-duty market research," Pickering says. "We listened to our members (and) what they wanted, and that's how a lot of the great things have evolved."

The site works very much like BookMooch, where users earn a point for every book they ship, and then they use those points to request new books. And for a fee of 42 cents, users can track the shipping of their book.

Since there's no real way for Pickering to ensure the quality of the books being swapped, he says he relies on the integrity and honesty of members.

"This is a club, and we ask our members to post books that they would expect to get from others," he says. "? They're all there for the same reason, and that's to share in the love of books."

Some other features on the site include message boards, live chat rooms and personal messaging.

"We're kind of taking that local book club and expanding it to a national basis," he says.

The site has been so successful that Pickering and Swarthout launched a sister site, SwapaCD.com, eight months ago. It now has an inventory of 50,000 CDs.

"All of our members have formed long-lasting friendships," he says. "They live thousands of miles away from each other and will probably never meet in real life, but they know they have a friend out there."
Back to the Top ↑