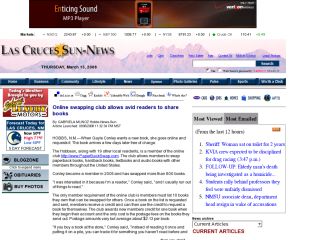 HOBBS, N.M.  When Gayle Conley wants a new book, she goes online and requests it. The book arrives a few days later free of charge.

The Hobbsan, along with 19 other local residents, is a member of the online club http://www.PaperBackSwap.com. The club allows members to swap paperback books, hardback books, textbooks and audio books with other members throughout the United States.

Conley became a member in 2005 and has swapped more than 800 books.

"I was interested in it because I'm a reader," Conley said, "and I usually run out of things to read."

The only member requirement of the online club is members must list 10 books they own that can be swapped for others. Once a book on the list is requested and sent, members receive a credit and can then use the credit to request a book for themselves. The club awards new members credit for one book when they begin their account and the only cost is the postage fees on the books they send out. Postage amounts vary but average about $2.13 per book.

"If you buy a book at the store," Conley said, "instead of reading it once and putting it on a pile, you can trade it for something you haven't read before and
Advertisement
then you don't have stacks of books around the house that you're not going to read anymore."

Having stacks of books lying around at home is exactly what inspired co-founder Richard Pickering of Atlanta to begin the online club.

"I used to travel all the time on business and when I did, I used to read paperback books all the time," he said. "I would bring them home and read these books once and stack them up in my closet, and I literally had hundreds."

Pickering attempted to sell his books to a used book store. When the owner selected only a few from the boxes he brought in, he decided there had to be another option. There wasn't.

He decided to create an option by starting the paperback swapping online site with Robert Swarthout, also of Atlanta.

The site has expanded quickly due to word of mouth, Pickering said.

Members like Conley have told their friends about the club, and it has grown from about 300 books available to 1.8 million.

A friend of Conley's, Kristi Martinkewiz of Hobbs, became a member when she heard of the Web site in 2006.

"I was really trying to get back into reading moretrying to find more time to read a quantity of books. That's what's neat about it, you don't have to worry about buying a lot. You can read in quantity and you can really explore a lot of different types of reading genres," Martinkewiz said.

"It creates an opportunity for people to talk about their favorite authors, their favorite books, whatever it may be," Pickering said, "and they can find other people that have very similar interests."

There are sections devoted to gardening, cooking and diet, romance, mystery and thrillers, among others.

"I've sent the wrong book," Martinkewiz said with a laugh, "I just made it right and I sent her postage to send me that one back."

"But they keep an eye on people's accounts," Conley said, "and if ... you mistreat the system, they'll boot you out."

In addition to the book swapping online club, members can also join CD and DVD swapping sister sites. The rules are the same and swapping across sites is possible.

And though membership to the club is free, Pickering said an annual membership fee of $10 is a future possibility.

"But we're not charging that now," Pickering said. "We're trying to support the club by offering the add-on services."

Paper Back Swap online book club: http://www.PaperBackSwap.com
Back to the Top ↑