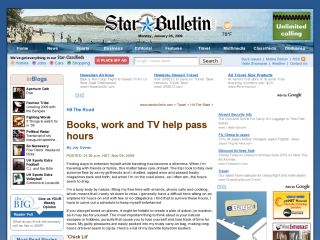 Finding ways to entertain myself while traveling has become a dilemma. When I'm traveling with friends or family, this matter takes care of itself. The trip I took to Italy over summer flew by as my girlfriends and I chatted, sipped wine and passed trashy magazines back and forth, but when I'm on the road alone, as I often am, the hours seem to drag.

I'm a busy body by nature, filling my free time with errands, phone calls and cooking, which means that I rarely sit down to relax. I generally have a difficult time sitting on an airplane for hours on end with few or no obligations. I find that to survive these hours, I have to carve out a schedule to keep myself entertained.

If you also get bored on planes, it might be helpful to create a plan of action (or inaction, as it may be) for yourself. The most important thing to think about is your natural escapes or hobbies, pursuits that cause you to lose yourself and lose track of time for hours. My guilty pleasures are easily packed into my trusty carry-on bag, making long hours of travel seem to zip by. Here's a list of my favorite boredom busters:

'Chick Lit'
One summer when I was living in London, I discovered the Jane Green books and drank them down like water. Every day, I would visit the local charity book shop to trade the book I had bought the day before for the next one. As an English major, this was pure guilty pleasure. In fact, I'm sure I can hear my former professors gasping as I write this!

I save up books from this genre for my plane rides because their easy readability makes the hours slip by, demanding little critical thinking or analysis. However, this can turn into an expensive habit, so I've joined a Web site called PaperBackSwap.com, which allows you to request books from other members, for free, once you've sent out a few books of your own (at about $1.20 a pop).

Work
Flying always feels like lost time, so being productive while traveling always makes me feel like I've accomplished something without thinking about it. While I can't work for an entire eight-hour flight, I find that devoting even an hour to a project allows me to feel better about my workload by the time I land. For me, working on the plane creates a sense of normalcy in what is otherwise a space very different from my normal work environment.

Television
I have always been someone who felt fairly confident that I don't care much what other people think of me, but as I began watching "Gossip Girl" on the plane, I really had to work on that one. This TV show is just sickeningly nice to look at, and the first time I began watching it, while sitting in the first-class cabin during a short flight from Boston to Chicago, I looked up and realized that all the middle-aged businessmen in suits sitting around me were watching it over my shoulder!

I'm a little bit embarrassed about my addiction to teenybopper TV series, but I get lost in their worlds in a way that makes time fly by.

Joy Uyeno travels frequently throughout the year, and her column geared toward young and beginning travelers appears the second Sunday each month in the Star-Bulletin Travel section.