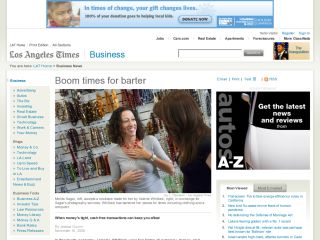 The 37-year-old actress and writer from Studio City holds down sporadic film and television gigs to cover her rent, utilities, car payments and insurance. For everything else -- head shots and haircuts, clothing and cut reels -- she trades her handcrafted jewelry.
She started swapping for goods while at work on the set. But now the classifieds website Craigslist and her MySpace page for Fancy Pants Jewelry have become great places to find even more trading partners. Her best scores include microdermabrasion treatments, a used Apple G4 iBook computer and Marc Jacobs jeans.

"Jewelry-making has become a creative outlet for me as well as an extra income and barter tool," Whitlock said. "It has made a huge difference in my life."

As the financial crisis makes cash and credit increasingly scarce, the ancient custom of bartering is booming. Cost-conscious consumers are getting creative to make every dollar count.

Some are dusting off books, DVDs, video games and other little-used items to trade for necessities or gifts. Others are exchanging services such as house painting for Web design or guitar lessons for clerical work.

These newly minted cheapskates are seeing the world through green eyeshades, cutting costs wherever and whenever they can.

"In the last couple of months, it's been like a bucket of cold water in our faces," said Mary Hunt, founder of money management site DebtProofLiving.com. "It has woken us up. We are paying attention to what things cost."

Every recession triggers bartering, economists say. But the Internet has given the practice unprecedented reach. Before the Web connected strangers from all corners of the country, bartering was limited by geography and social circle.

As a form of everyday currency, bartering has downsides. It's far more time-consuming and tricky to negotiate the exchange of goods and services than it is to simply plunk down some bills. Sometimes prospective swappers flake out or try to rip off their trading partners. Transactions don't always go smoothly.

Plus, there are potential tax liabilities. The Internal Revenue Service considers income from bartering taxable.

Still, exchanging something you no longer want or need for something you do is appealing to many. A growing number of websites, including TradeaFavor.com and JoeBarter.com, cater to the cost-conscious. There were 148,097 listings in the barter category of Craigslist in September, up sharply from 83,554 a year earlier, according to the classifieds website. Bartering via Craigslist's Los Angeles service was up 72% over the same time, with 4,009 listings in September. Specialty sites such as PaperBackSwap.com and Peerflix.com, are also popular.

Jessica Hardwick, founder of SwapThing.com, started noticing an uptick in bartering in the spring. Families who were worried about the soaring price of groceries and gas started taking vacations by swapping homes with people who lived within a few hours' drive. As the kids prepared to go back to school after their trips, they bartered PlayStation games, skis, even a bicycle for school uniforms.

Over the last few months, her Cupertino, Calif.-based site's membership and traffic have snowballed as more people look to trade their talent and time. With 162,000 members, SwapThing.com, which used to be populated by collectors and video-game enthusiasts, has been transformed into a bustling bazaar for everyday goods and services.

"As long as the economy is the way it is, people have to find alternative ways to get the things they need and want," Hardwick said. "People are turning to the Internet."

That's where Erin Huggins, a 35-year-old Pilates instructor in Los Angeles, is building her business.

After stints promoting bands, tending bar and working for Courtney Love, Huggins traded the rock 'n' roll lifestyle for the healing arts. She opened her own Pilates studio in 2005 but had to shutter it in April, when she lost some clients who had been thrown out of work by the Hollywood writers strike.

So she shifted her strategy. Now she sees a handful of clients in a home studio, and she's growing her practice online by creating a virtual studio at ErinHuggins.com, where people can download instructional videos.
Sense of community

Huggins is also using the Internet to stretch her budget. She swapped one year of Pilates and nutritional consulting for branding and image consulting worth about $30,000. She saves $500 a month on body work by trading her services with a friend who is a massage therapist.

She also barters for the smaller stuff. Rather than plunk down cash, she's hoping to offer someone an hour of private Pilates instruction, which normally costs $150, to clean her house once a week.

"I don't think people realize the power of bartering," Huggins said. "Sometimes we don't value what we have in our services because we put so much value on the tangible dollar."

Chris Murphy, a 42-year-old violinist from Santa Monica, has been bartering for years. He exchanged private lessons for website design services and played a wedding for a used Nissan Pathfinder. Soon he was trading for vacation homes in Big Bear, even legal services. He gives some of his students barter credits: For every four hours they work in his office doing data entry and other duties, they get a music lesson.

For Elle Febbo, a 34-year-old freelance writer and mother of four sons from Saugus, bartering is more of a necessity. Finances tightened with the writers strike -- her husband is a key grip -- and she was out of work for a few years recovering from skin cancer and working with a nonprofit organization to help others cope with the disease.

The family made big changes, such as renting out their home and moving into a smaller one to scrimp on expenses. She also barters. That's how she exchanged a flat iron she won in a raffle for five BB guns and four walkie-talkies for summer camping trips.

"I count it as a blessing that bartering is an option," Febbo said. "Somebody's got what you need, you have something someone else wants."

Helen Roberts, an economics professor at the University of Illinois at Chicago, says holiday shoppers will turn to bartering and other cost-saving measures this year as their confidence in the economy sinks. "People are feeling they can't blow the budget in the way they used to be able to," she said.

"Bartering waxes and wanes," White said. "Money is really the most efficient mechanism."

Guynn is a Times staff writer.