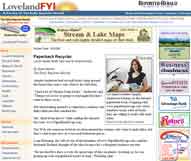 Angela Anderson had several books lying around the house but wasnt sure what to do with them.

I had a lot of Chicken Soup books, Anderson said. Things youre never going to read again but dont want to throw away.

She tried looking around Loveland for a solution, but didnt find one that satisfied her.

She kind of ran into it while surfing the Internet last year: www.PaperBackSwap.com.

The Web site connects book lovers from around the country who want to trade titles, but dont want to pay new or even used bookstore prices.

Lynn Pickering, the wife of one of the founders of www.PaperBackSwap.com, said her husband, Richard, thought of the idea because hes a frequent business traveler.

He traveled five days a week. He spent tons of time on planes. In doing so, he was picking up a lot of paperback books to read, Pickering said.

Soon the titles built up in their North Carolina home, she said. What a shame, she said he once reflected, many business travelers buy books to read on planes, read them once and then store them in boxes somewhere.

And Anderson couldnt be happier with it. She said she used to go to a local grocery chain for paperback books, or Barnes and Noble for something bigger.

But with two small children, Jeremy, 3, and Vivian, 1, its sometimes a trial to load them all up for a trip to the bookstore, she said.

Anderson has ordered self-help books, like the Body for Life series, or from the New York Times Bestseller List, like Angels and Demons by Dan Brown.

We got it within two weeks, she said.

The site also has a wish list function. If a book a user wants is not currently posted by another user, they can add it to their wish list.

Anderson said her husband, an infrequent reader, has ordered books from the site.

He likes to save money, she said. He wants me to order some poker how-to books.

 A new user at www.PaperBack Swap.com posts at least nine books that he or she own for trade. The user then receives three credits to order different books from the Web site.

 When a member orders a book from the site, it usually arrives in the mail within one to four weeks.

 If a member receives an order for a book, the member can print a book wrapper by computer with the address of the recipient on it. When the recipient receives the book, then the original owner of the book gets a credit for another order on the site.

 Felicia Jordan
Back to the Top ↑