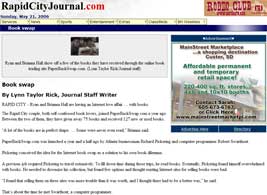 RAPID CITY - Ryan and Brianna Hall are having an Internet love affair  with books.

The Rapid City couple, both self-confessed book lovers, joined PaperBackSwap.com a year ago. Between the two of them, they have given away 75 books and received 127 new or used books.

"A lot of the books are in perfect shape.  Some were never even read," Brianna said.

PaperBackSwap.com was launched a year and a half ago by Atlanta businessman Richard Pickering and computer programmer Robert Swarthout.

Pickering conceived the idea for the Internet book swap as a solution to his own book dilemma.

A previous job required Pickering to travel extensively. To fill down time during those trips, he read books. Eventually, Pickering found himself overwhelmed with books. He needed to downsize his collection, but found few options and thought existing Internet sites for selling books were bad.

"I found that selling them on these sites was more trouble than it was worth, and I thought there had to be a better way," he said.

Thats about the time he met Swarthout, a computer programmer.

Together, the duo created what Pickering believes is the "better way."

A person logs onto PaperBackSwap.com to join. Currently, the club is free, but eventually, it will require a yearly fee of between $10 to $12, Pickering said.

After joining, that person posts at least nine books that they wish to give away. They also create a wish list of books they are interested in receiving.

After their nine books are posted, that person automatically gets three credits to use to receive books from other club members.

The computer, using the lists, automatically generates a message asking for members to package and mail the requested book.

The process can be fairly anonymous, with the program managing e-mails, but many members choose to contact other members by e-mail to talk about the books, Pickering said.

After a request has been made, the computer program will create a wrapper with addresses, calculated shipping costs, a bar code and other pertinent information. The wrapper can be printed from a home computer.

Most small paperbacks will cost about $1.59 for shipping and can be sent from a home mailbox. Books weighing more than a pound will require a trip to the post office, Pickering said.

By allowing the computer to do the searching, the e-mailing and postal calculating, the process is simplified, Pickering said. And that was his goal from the start.

"Its a really great system.  We take a lot of the guesswork out of it," he said. "Its a win-win situation for everyone."

The Halls have found it to be exactly that.

"You can find a book on almost anything," Brianna said.

The Halls also estimate that they are saving a huge amount of money. One of the books that Brianna, a photographer, received was a $75 photography text book.

The Halls were so excited about PaperBackSwap.com that they have introduced it to their friends, Toni and Shawn Hill, who joined in the fall. Within seven months of becoming members, the Hills sent out 50 books and received 30.

Toni also swaps for her father, who is an avid reader. "Its a lot cheaper to do it this way."

The club allows its members to sign up for additional services, for a fee. They can join Box-O-Books, which allows them to trade more than one book at a time. The club also has a chat room, a discussion forum and a section for homeschooled students.

Pickering said a lot of the members have developed friendships based on their love of books. And, of course, they have saved a lot of money, he said.

"People have saved hundreds and hundreds of dollars on books," he said. "And its a lot of fun to do."

The Halls agree. They have become so enthused with the club that they sometimes buy books at yard sales simply to swap on PaperBackSwap.com.

"Its an awesome program," Brianna said. "And you dont break the bank."
Back to the Top ↑