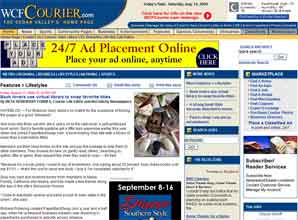 WATERLOO --- For Shannon Surly, there's no match for the suspense of turning the pages of a good "whodunit."

And once she finds out who did it, she's on to the next novel. A self-professed book worm, Surly's favorite pastime got a little less expensive earlier this year when she joined PaperBackSwap.com, a book-trading Web site with a library of more than a half-million titles.

Members put their used books on the site and pay the postage to ship them to other members. They browse for new (or gently read) others, searching by author, title or genre, then request the ones they want to read --- for free.

"Because I'm a book junkie, I used to buy at bookstores, only saving about 20 percent. Now, these books cost me $1.51 --- that's the cost to send one book. I love it. I'm completely addicted to it."

Surly has sent and received books from members in Maine, Florida, California and Alaska, and has made a few friends along the way in the site's discussion forums.

"I hope to eventually receive and send a book to every state in the union," she said.

Richard Pickering created PaperBackSwap.com a year and a half ago, when he (a frequent business traveler) was drowning in paperbacks purchased in airports across America.

The paperbacks didn't resell well on eBay or Amazon.

"I thought, 'There's got to be a better way to do this,'" said the Atlanta-based real-estate investor. "'What if we had a virtual library online, where people could swap one book for one book, free of charge?"'

His idea worked. Thousands of people come online to search and trade thousands of new books a week.

"We're as big as any library around," Pickering said.

Romance and mystery are the most popular genres, but Krista Persing, a Columbia, S.C. stay-at-home mother, finds plenty of titles to suit her non-romance, non-mystery bent. She's usually in the middle of one book relating to homeschooling, one on a Christian/biblical topic and something just for fun.

"Right now I'm reading 'North and South' by John Jakes," Persing said. "We just moved to South Carolina last summer, so I am enjoying reading books that deal with the history of the South --- both fiction and nonfiction."

At first, Persing was skeptical of having to pay to send books but receiving them for free.

"Now, I realize this is actually one of the great perks of the program!" she said. "This way, you aren't sending money to someone and hoping they will actually send you the books you are asking for (unlike online auctions). I also like the idea that the books I'm sending out are books someone has requested and really wants to read."

The site also has a "wish list" feature, a feedback button and lists of the "10 Most Recently Posted Books" and "All Books Posted Today."

Michael Newton's "The Encyclopedia of Serial Killers" was on Surly's wish list for almost 5 months. She recently received the book and eagerly awaits the discovery of more of her wish-list books on the PaperBackSwap listing.

Liz Dolinger, 20, an English literature major at the University of South Carolina, also found a surprising level of customer service.

"It's fantastic --- I had a couple of small problems, but when I reported them, the Pickerings called or e-mailed me right away," said Dolinger, who uses the site for textbooks as well as for finding her out-of-print favorite childhood series --- "Dorrie the Little Witch" by Patricia Coombs.

"I'd been looking for it forever and a day," she said.

Dolinger has done an equal amount of mailing out. "I've been trying to pare down my book collection and keep only stuff I know I'm going to reread," she said. "A college apartment only has so much room."

Members can also choose the "Box-O-Books" option and go offline to trade large numbers of titles at once. For Surly, it was a way to pare down her collection of "hundreds and hundreds of books." But as it turns out, she has received more books than she has sent.

"It's a win/lose situation in terms of space," she said, laughing.

"I will never part with that one," said Surly.
Back to the Top ↑