Pity Not The Paperback 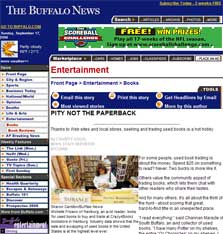 For some people, used book trading is about the money. Spend $25 on something to read? Never. Two bucks is more like it.

Others value the community aspect of trading books, which lets them chat with other readers who share their tastes.

And for many others, it's all about the thrill of the hunt - about scoring that great, hard-to-find title in an unexpected place.

"I read everything," said Channan Maracle of South Buffalo, an avid collector of used books. "I have Harry Potter on my shelves, the entire "Oz Chronicles' on my shelves. I have every Stephen King, and I have a vast Christian library. I'm definitely proud of the Christian book collection I've put together."

No doubt about it: people love used books. And that passion is hotter than ever.

Sales and swaps of used books - including many secondhand paperbacks - in the United States stand at the highest level ever, industry data shows.

"It's exciting. It's so much fun watching it grow," said Richard Pickering, the Atlanta businessman who founded the Web site PaperBackSwap.com, an Internet book-trading club which has seen its online stock of titles boom from 50,000 last year to more than 700,000 today. "People like to read books, and they like to be able to share their opinions. It's the whole social networking side of it - it's not just about trading books anymore."

So are online providers, who make up a big component of the growth in the used book market over the past few years.

But not everybody sees this upswing as a win-win situation.

Small used book shops - long a staple of many city and village streetscapes - are struggling to cope with the impact of the Internet on business.

Owners of these shops see some upsides to the trend: they can generate more out-of-town business by listing their titles online, for instance.

But they also see a downside.

When readers browse for cheap books on the Web, and have the books shipped right to their doorsteps, they are far less likely to make the trip to a bricks-and-mortar bookstore, some local shop owners said.

"It's changing my market," said Gerry Maciuba, owner of the Paperback Trading Post on Seneca Street in South Buffalo. "I like the Internet, because I'm open 24 hours a day around the world. We send books to Russia, China, Pakistan - all over."

But, Maciuba said, the Web has also changed people's expectations.

"Some of the prices online are ridiculous," said Maciuba, who sells books for half of the cover price, less if you bring a trade. "People think if they go online they can get it for a dollar, versus $3.99 at my bookstore."

Online and in shops

Western New York readers include both fans of online book trading and those who prefer walking the crowded aisles of local bookstores.

"Waiting a couple of days for them isn't great," said Esther Hughes, 49, a nurse from North Buffalo who has tried online book shopping but prefers buying used titles at the Second Reader Book Shop on Hertel Avenue. "I want to read it right away."

But many people love both kinds of book markets: virtual and real-world.

"I do read a lot," said Molly Brower, 39, a Buffalo resident who likes PaperBackSwap.com for acquiring titles, as well retail bookstores and garage sales.

Brower said the beauty of online swapping is that it lets her unload books she's read and knows she won't reread. Otherwise, she said, her house - which includes an 8-month-old baby - gets kind of overcrowded.

"I've really been trying to get rid of some of them," she confessed. "If I like them and think I'll read them again, I'll keep them. But I've noticed in recent years I want to keep fewer of them."

Maracle, the South Buffalo resident, also casts a wide net for her used books. Besides online sites and book shops, she even hits "a lot of thrift shops, yard sales."

Maracle's reading habits, in fact, mirror the latest trends the book industry is tapping into. She, like many people, sees a used book as just as good as a new one.

Fueled by the Internet, the used book market has seen strong and sustained growth in the past few years.

In 2005, the Book Industry Study Group undertook the industry's first comprehensive study of used-book sales trends, including both major online vendors - ranging from Amazon and Ebay to Barnes & Noble and Abebooks - and traditional shop booksellers.

And there appears to be more room for growth.

According to the study, the used-book market in 2004 accounted for only 8.4 percent of total consumer spending on books.

Sellers believe that as people become more comfortable with online book browsing, that chunk of the market will grow.

"People can't believe it. They can't believe it really works," said Pickering, founder of PaperBackSwap.com, a club which enables readers to post and swap their used books with other readers at minimal cost - just $1.59 in postage per book.

"It's sheer convenience," said Pickering, who got the idea for the site after realizing that he owned many paperbacks that were collecting dust, but others might like to read.

A new kind of reading

In a way, some observers of the trend said, the fact that the Web is making cheap books - particularly paperbacks - more popular than ever is fitting.

Dr. David Schmid, professor of English at the University at Buffalo and an expert on paperbacks and pop culture, said that mass market paperbacks - which date to the 1930s in the form people are familiar with today - far exceeded publishers' expectations when they first appeared.

"No one knew if there was a (paperback) market," he said. "But it immediately took off. It was an overnight sensation. And then the challenge became keeping up with the demand."

Now, Schmid said, online selling and swapping has boosted the paperback once again to new heights of popularity.

"These Web sites really illustrate how paperbacks changed reading practices," said Schmid. "Before paperbacks, the only people who had substantial libraries were people who had a lot of money. With paperbacks, that totally changed. You've got a form of book that's designed to be thrown away, if you want - you're not going to collect these things. You're going to pass it on to somebody else."

And that sharing of books with others has changed reading itself, Schmid said.

"Reading has become a more social activity," he said. "You have a group of customers out there who are more literate than they've ever been before."
Back to the Top ↑