Bookworms Trade Titles On The Web 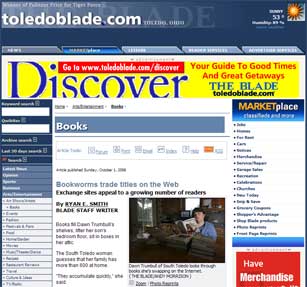 The South Toledo woman guesses that her family has more than 600 at home.

"They accumulate quickly," she said.

Maybe not for much longer.

Like a growing number of Americans, Mrs. Trumbull, 42, has discovered a Web site that allows her to trade titles with other bookworms, PaperBackSwap.com.

She uses the site to list some of her paperbacks that she's already read, and for each one that another user requests, she can get a free book from someone else. In just a couple of months, she has received six books.

"We're on a limited budget, and I do like to read," Mrs. Trumbull said. "This was a way to get rid of some of my old books."

A number of sites have sprung up to help book lovers keep reading without worrying about cost or, inevitably, what to do with the tomes later. Similar sites include FrugalReader.com, TitleTrader.com, and Bookins.com. Some swapping sites reach beyond books to music and movies too.

These sites are not the province of just a few bibliophiles. At PaperBackSwap.com, more than 750,000 books currently are listed on just about any subject; about 25,000 are traded every week, according to co-founder Richard Pickering, of Atlanta.

His service is free to anyone. All it requires is that members list at least nine books to start out and that senders pay the cost of postage, usually $1.59. The Web site even formats a mailing wrapper to facilitate the process.

The site isn't a moneymaker, but is able to offset costs, he said.

Mr. Pickering said he got the idea after used book stores and existing Web sites couldn't help him deal with the mountains of books he was bringing home. They didn't want what he had to offer or weren't cost effective.

"During the course of my business travels, I was always buying new paperback books every time I went to an airport," he said. "When I got home, I was literally stuffing them in the closet. I had hundreds of them."

PaperBackSwap.com, which got off the ground two years ago, also offers discussion forums and personal messaging between members to encourage talk among a community of readers, whose interests seem to know no bounds.

"We've seen some strange titles come through, that's for sure," Mr. Pickering said. "Whatever book you can think of, somebody out there probably wants it."

Mitchell Silverman, founder of Bookins.com, said he sees this as part of a national trend of swapping stuff.

"I have no doubt there will be tens of millions of people swapping stuff," he said by phone from New York City.

He thinks it will appeal to people who normally shop at used book stores and maybe one day have an impact on the publishing industry.

"I think right now we're not even a blip on the radar screen for the publishers, but I'm fairly certain we'll start nibbling away at that business," he said.

Still, Web sites like PaperBackSwap.com are very attractive to people like Sarah Dutridge, 31, of West Toledo, who sometimes has trouble finding exactly what she's looking for at a used book store and whose experience with the library tends to involve fines.

Since learning about the service in January, she's received at least 85 books - some of which she's already recycled back into the program.

"I try not to keep too many because I already have a lot," she said. "The popular books, I tend to try and read right away and then send them back out."
Back to the Top ↑