Ill Trade You My Titanic For Your Spider-Man 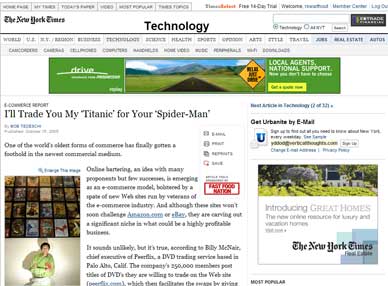 One of the world's oldest forms of commerce has finally gotten a foothold in the newest commercial medium.

Online bartering, an idea with many proponents but few successes, is emerging as an e-commerce model, bolstered by a spate of new Web sites run by veterans of the e-commerce industry. And although these sites won't soon challenge Amazon.com or eBay, they are carving out a significant niche in what could be a highly profitable business.

It sounds unlikely, but it's true, according to Billy McNair, chief executive of Peerflix, a DVD trading service based in Palo Alto, Calif. The company's 250,000 members post titles of DVD's they are willing to trade on the Web site (peerflix.com), which then facilitates the swaps by giving members printable forms that include postage and the recipient's address.

Trades are not directly between two people. For every DVD shipped from one's library, the sender receives credit toward the acquisition of other titles available in the network. Peerflix also determines the relative value of a DVD, to prevent people from trading, say, "Halloween 5" for a restored version of "Citizen Kane."

In exchange for this service, Peerflix charges users $1.50 for each title they receive. Of that, 51 cents goes to cover the company's shipping and handling costs.

"The rest comes to us," Mr. McNair said. "This is an extremely high-margin business."

Mr. McNair, who introduced the company in 2004, said the Web site had made significant progress in the last year, with membership growing fivefold and the number of available DVD's growing at nearly the same rate. The site offers roughly 37,000 DVD titles, and has a total inventory of 225,000 copies. By comparison, the DVD rental service Netflix offers about 65,000 titles. Users trade DVD's about five times each month.

Even though digital distribution is presumed to be the future for media businesses, Mr. McNair says he believes that physical media will remain the bedrock of the industry and of his business for the foreseeable future. About 1.5 billion DVD's are purchased annually in the United States, he said, or about 20 a household. "And our members say they purchase more DVD's now because they know that after they watch the movie it'll still have value," he said.

Investors are apparently attracted by his logic. Mr. McNair said the company in late 2004 raised about $2 million from the venture firms 3I and BV Capital, a firm founded by former executives from AOL Germany. That cash would have been more than enough to last until mid-2006, Mr. McNair said, but Peerflix raised another $8 million in October 2005, primarily from Battery Ventures, the firm behind the early search engine Infoseek. More money is on the way.

"One of the key differentiators in this space will be who is best capitalized," Mr. McNair said. "We have some announcements coming up that'll be well reflective of that."

As Peerflix ventures beyond movies and into other forms of media, as Mr. McNair says he hopes to do, it will face upstarts and established businesses at every turn. Bartering networks have sprung up, for example, around CD's (LaLa.com), video games (www.GameSwap.com) and books (PaperBackSwap.com).

La La Media, which operates LaLa.com and is also based in Palo Alto, is another recent darling of the Silicon Valley venture capital community, having raised $9 million since the business formed in June 2005. According to Bill Nguyen, one of the company's founders, the site has built an inventory of two million titles since its debut in March, and every day members add 30,000 copies to the collection.

"People are starting to realize this is a really great way of finding new music," Mr. Nguyen said.

La La charges $1 a trade  about 75 cents for postage and handling costs. The company sets aside about 20 cents for musicians who perform on the disc. "We're a little bit commie, a little bit co-op," Mr. Nguyen said.

Like Peerflix, La La spends little on marketing, relying instead on its members to spread the word. The company, which has 23 employees, also spends little on customer service; members typically rely on the site's online forums to guide each other through problems, and the site has a liberal credit policy for damaged discs. (Members merely send an e-mail to the site, reporting that the disc is damaged, and they are sent another.)

As promising as these businesses are, they represent no threat to big online companies like Netflix and Amazon, analysts said. "The mainstream audience, in my view, is not interested in barter, given how simple renting and purchasing have become," said Safa Rashtchy, an Internet analyst with the investment firm Piper Jaffray. "Barter will be a small fraction of e-commerce activity."

Run as they are by tiny teams of entrepreneurs, though, these companies embody the kind of asymmetric economic threat that has forced established businesses to at least take notice, if not entirely alter their business plans. Take books, for instance. PaperBackSwap's members trade 30,000 books weekly for $1.59 apiece, according to Richard Pickering, one of the site's founders. The company is now exploring ways to help members trade nonmedia items, possibly within distinct geographical areas.

"You're going to see a lot more from online bartering in the future," Mr. Pickering said. "This is just in its infancy."
Want fewer ads?
Back to the Top ↑