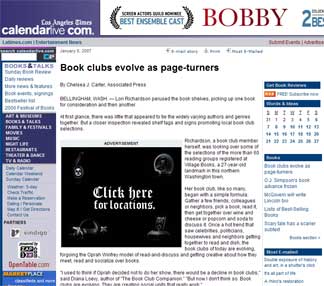 BELLINGHAM, WASH.  Lori Richardson perused the book shelves, picking up one book for consideration and then another.

Her book club, like so many, began with a simple formula: Gather a few friends, colleagues or neighbors, pick a book, read it, then get together over wine and cheese or popcorn and soda to discuss it. Once a hot trend that saw celebrities, politicians, housewives and neighbors getting together to read and dish, the book clubs of today are evolving, forgoing the Oprah Winfrey model of read-and-discuss and getting creative about how they meet, read and socialize over books.

"I used to think if Oprah decided not to do her show, there would be a decline in book clubs," said Diana Loevy, author of "The Book Club Companion." "But now I don't think so. Book clubs are evolving. They are creating social units that really work."

There's Pages, Pictures and Pints, an all-comers monthly book club in which participants read a book, go see the movie adapted from the book and then get together for drinks at a bar to discuss it. Among the books up for discussion in the new year are John le Carré's "The Constant Gardener" and Joe Simpson's "Touching the Void."

Around the country, book clubs also have become networking tools for young professionals. In Hollywood, a group of production assistants formed a club to discuss books about the movies or television shows they work on. In New York, would-be playwrights get together to read published plays and make suggestions about their own works.

Norman Hicks founded Reader's Circle, a website aimed at promoting an alternative to the traditional book club, as a way to meet people after graduating college. Rather than have a group read one book and follow a structured format, Reader's Circle promotes bringing people together in public settings, such as coffeehouses, to discuss a variety of books at once.

Pickering said it also was cost-effective for participants who can't afford to buy new books on a routine basis. PaperBackSwap.com has amassed a library of 900,000 books and sees its users trade about 30,000 books a month.

With the decrease in book sales, bookstores large and small have begun using the Internet and technology, such as the iPod, to sell books that can be downloaded. They also have begun creating online clubs to link readers together. But it is still the face-to-face meetings, the social aspect that appears to drive the book club culture.
Back to the Top ↑