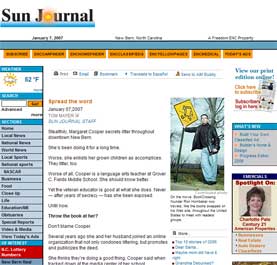 She's been doing it for a long time.

Worse, she enlists her grown children as accomplices. They litter, too.

Worse of all, Cooper is a language arts teacher at Grover C. Fields Middle School. She should know better.

Yet the veteran educator is good at what she does. Never  after years of secrecy  has she been exposed.

Throw the book at her?

Several years ago she and her husband joined an online organization that not only condones littering, but promotes and publicizes the deed.

She thinks they're doing a good thing, Cooper said when tracked down at the media center of her school.

Of course, like most exclusive societies, the Coopers and their club put a positive spin on their actions.

They don't call it littering at all.

They call it committing random acts of literacy.

Like a literary Gretle, Cooper has seeded New Bern and other ports with a trail of books that lead all over the world.

Anonymously releasing into the wild one registered tome at a time, marcoop  the online name she uses to conceal her identity  has seen her litter picked up and taken as far away as Spain.

No boundaries was the idea behind BookCrossing, the Internet-based inspiration of Ron Hornbaker and his wife, Kaori, more than five years ago.

Although the numbers have altered considerably since, the business model hasn't changed much. The plan Hornbaker launched half a decade ago is virtually the same one Cooper and half of a million people worldwide follow today.

"After a glance at his full bookshelf, the idea of tracking books occurred to him," reads Hornbaker's press machine at bookcrossing.com.

The entrepreneur envisioned a Web site where people could register books by number, tag them with easy instructions, leave them to be found by chance and then track their progress when a finder posted it online.

That Eureka! moment quickly led to a name  BookCrossing  and almost as quickly to the logo of a running book, designed by Kaori.

At first the site crawled along, gathering about 100 members a month. Then Book magazine editors decided to publish a story on the enterprise.

Now, BookCrossing averages about 300 new members a day  all of them leaving books, finding books and journaling the adventure on its Web site.

Under the auspices of BookCrossing, the popular educator has been leaving book after book at various locations throughout New Bern  frequently at Bank of Arts where Carol Tokarski is executive director, but also at locations such as Port City Java and Cow Café.

At first, about two and a half years ago, her undertaking began as a personal charity.

"My husband and I had tons and tons of books just sitting around," she said. "I thought, 'What a terrific way to get rid of some books we weren't going to reread.'"

But then came a higher purpose.

"It's a great way to get books in the hands of people," Cooper said.

BookCrossing's Web site is intricate enough to search tagged books down to specific streets and venues in thousands of cities around the world, including New Bern. Yet Tokarski wasn't aware until now that Cooper and others had released almost four dozen books at the nonprofit Bank of the Arts since May 2003.

The idea appeals to her.

"What a great, other purpose for a facility like this," she said. "I'm sure I've seen some of those titles here."

Titles such as, "The Great Influenza: The Epic Story of the Deadliest Plague in History," released at Bank of the Arts around Dec. 20.

"That sounds very familiar," Tokarski said. "I swear I saw it  and I thought, 'Who would be reading that?'"

Beginning like BookCrossing with humble numbers  about 70,000 books  the Internet site is now updated almost hourly, and offers a virtual library of almost 900,000 books available for trade.

Paperbackswap.com today offers a host of more bells and whistles than it did when it began a year ago, but cofounders Richard Pickering and Robert Swarthout started the business with innocent notions.

"I used to travel all the time on business," Pickering said by phone from his north Atlanta office. "I was buying books at airports all the time. My collection of used books was growing at a phenomenal rate."

Like any good businessman, Pickering tried to turn his "gently used books" into profit. Efforts to sell his books online proved not cost effective, and efforts to resell them to stores specializing in used books proved frustrating.

"I thought there had to be better way," he said.

Meet at the book swap

What Pickering began as a means for family and friends to trade books rapidly grew in monstrous proportions.

Under the simple premise that registered members catalogue their books, request books of one another and mail them at their own expense  members must trade a book to get a "credit" to request a book; and everyone self-pays postage to keep the whole thing even  the site has blossomed.

"People have formed lasting friendships," Pickering said. "These members are able to form relationships with other people. All of us have a shared interest  the love of books."

That's a lot of love

Were paperbackswap.com to continue growing at the exponential rate it has so far assumed, a library to rival the world's largest  the Library of Congress at more than 58 million manuscripts  isn't inconceivable.

Members also now trade in all 50 states in addition to Puerto Rico and Guam.

"In any given month there are about 30,000 books being shipped from one member to another," Pickering said. "The books move all over the United States."

Have books, will travel

Nowadays, it's not only books that are moving all over the country.

"The latest thing that's happened is we've got a core group of members in some cities who want to get together," Pickering said. "And people want me to come and meet with them."

So he does  as long as it fits in his schedule. The operation is not employee-rich.

"There are four of us," Pickering said. "It's pretty amazing, huh?"

Amazing one reader at a time

Smaller but no less important is a book swap founded by Sharon Rud and Nancy Tripp in New Bern.

Carrols Corp. owns seven Burger King restaurants in the New Bern area where Rud is district manager and Tripp a store manger. About three years ago, the pair joined to offer free books to their customers.

At both New Bern restaurants and a restaurant in Kinston, customers are greeted by a filled bookcase inside the store. Inside are paperbacks, hardcovers and magazines available for trade or for leisurely reading.

"The restaurant funds the purchase of the books," said Rud, who buys the used titles from donation centers such as The Salvation Army or Helping Hand.

"I call it my part-time hobby  buying the books," Rud said. "It's sort of my secret mission."

The secret is out

When the program peaks, and as expenses allow, Rud finds herself stocking the restaurants with about 100 books a week.

The stock is appreciated.

"I could tell you endless compliments," Rud said. "A lot of seniors really come in."

But not only restaurant customers find the exchange useful.

The project has other encompassing benefits.

"Passing it on is the main thing," Rud said about the books her customers take home. "Share something you've enjoyed with an unknown person."

Which brings us back to littering.

One of the common questions BookCrossing's Ron Hornbaker fields is the notion of leaving books laying around in public. Again, from his press office:

"Aw, come on. Nobody considers books 'litter.' Also, it's nearly impossible to throw a book away; it's just one of those objects with some special kind of intrinsic value that tells you it's to be saved, to be treasured. ... What's the worst that could happen ... you might see a few books on park benches, or bus seats, or diner tables.

"Make the world one big library."

One book swap at a time.
Back to the Top ↑