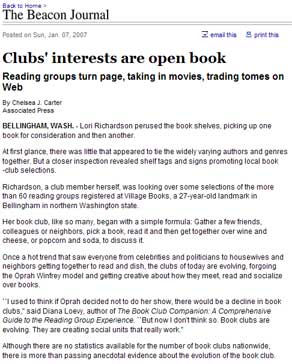 BELLINGHAM, WASH. - Lori Richardson perused the book shelves, picking up one book for consideration and then another.

At first glance, there was little that appeared to tie the widely varying authors and genres together. But a closer inspection revealed shelf tags and signs promoting local book -club selections.

Richardson, a club member herself, was looking over some selections of the more than 60 reading groups registered at Village Books, a 27-year-old landmark in Bellingham in northern Washington state.

Her book club, like so many, began with a simple formula: Gather a few friends, colleagues or neighbors, pick a book, read it and then get together over wine and cheese, or popcorn and soda, to discuss it.

Once a hot trend that saw everyone from celebrities and politicians to housewives and neighbors getting together to read and dish, the clubs of today are evolving, forgoing the Oprah Winfrey model and getting creative about how they meet, read and socialize over books.

"I used to think if Oprah decided not to do her show, there would be a decline in book clubs," said Diana Loevy, author of The Book Club Companion: A Comprehensive Guide to the Reading Group Experience. "But now I don't think so. Book clubs are evolving. They are creating social units that really work."

Although there are no statistics available for the number of book clubs nationwide, there is more than passing anecdotal evidence about the evolution of the book club.

There's "Pages, Pictures and Pints," a monthly club in which participants read a book, go see the movie adaptation and then get together for drinks to discuss it. Up for discussion in the new year are John le Carre's The Constant Gardener and Joe Simpson's Touching the Void.

There's also a mother-daughter book group. And for the area's cooking lovers, a group known as Armchair Chefs focuses readings on cookbooks.

Rather than have a group read one book following a structured format, Reader's Circle promotes bringing people together in settings such as coffeehouses to discuss a variety of books at once.

It's that same idea behind PaperBackSwap.com, an online book club that allows members to trade their books with others. The site also makes a book-of-the-month selection and offers online chats, said founder Richard Pickering of Atlanta.

Pickering said it was cost-effective for participants who can't afford to routinely buy new books. Since its inception, paperbackswap.com has amassed a library of 900,000 books and sees its users trade about 30,000 books a month, Pickering said.

With the decrease in book sales, bookstores large and small have begun using the Internet and technology, such as the iPod, to sell books for download. They also have begun creating online book clubs to link readers together.

But it is still the face-to-face meetings -- the social aspect -- that appears to drive a book club's success or failure.

"A lot of us in the group were mothers with children, and we were desperate to get out of the house," she joked.

But as their children grew up, "that once-a-month thing wasn't that necessary any more," she said. "Now, we just pick up the phone or go over and knock on the door."
Back to the Top ↑