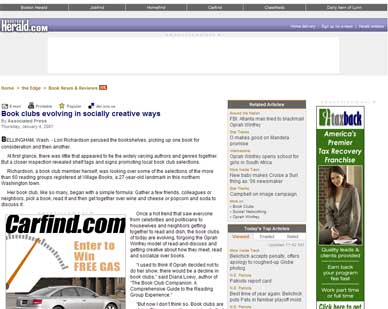 BELLINGHAM, Wash. - Lori Richardson perused the bookshelves, picking up one book for consideration and then another.

There's "Pages, Pictures and Pints," an all-comers monthly book club where participants read a book, go see the movie adapted from the book and then get together for drinks at a bar to discuss it.

Around the country, book clubs also have become networking tools for young professionals. In Hollywood, a group of production assistants formed a reading group to discuss books about the movies or television shows they work on. In New York, a group of would-be playwrights gets together to read published plays and make suggestions about their own works.

Rather than have a group read one book following a structured format, Reader's Circle promotes bringing people together in public settings, such as coffeehouses, to discuss a variety of books at once.

It's that same idea behind PaperBackSwap.com, an online book club that allows members to trade their books with others. The site also makes a book-of-the-month selection and offers live online chats for its members to discuss books, said founder Richard Pickering of Atlanta.
Back to the Top ↑