Evolution Of Book Clubs: What Would Oprah Say? 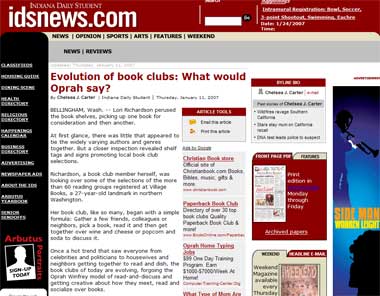 BELLINGHAM, Wash. -- Lori Richardson perused the book shelves, picking up one book for consideration and then another.

Richardson, a book club member herself, was looking over some of the selections of the more than 60 reading groups registered at Village Books, a 27-year-old landmark in northern Washington.

There's "Pages, Pictures and Pints," an all-comers monthly book club where participants read a book, go see the movie adapted from the book and then get together for drinks at a bar to discuss it. Among the books-turned-movies up for discussion in the new year is John le Carre's "The Constant Gardner" and Joe Simpson's "Touching the Void."

There's also a mother-daughter book group, which targets girls between nine and 12. And for those who like to cook, a group known as Armchair Chefs focuses on reading cookbooks.

The same idea is behind PaperBackSwap.com, an online book club that allows members to trade their books with others. The site also makes a book-of-the-month selection and offers live online chats for its members to discuss books, said founder Richard Pickering of Atlanta.

Pickering said it also was also cost-effective for participants who can't afford to buy new books on a routine basis. Since its inception, PaperBackSwap.com has amassed a library of 900,000 books and sees its users trade about 30,000 books a month, Pickering said.

With the decrease in book sales, book stores large and small have begun using the Internet and technology, such as the iPod, to sell books for download. They have also begun creating online book clubs to link readers together.

But it is still the face-to-face meetings, the social aspects, that appear to drive the book club culture -- and its success or failure.